Applied Viromics has two different platforms to generate AAV depending on the production scale and customer inquiry:

Both systems can make AAV vectors that give similar infectivity in vitro and in vivo. However, since producing lines are of human and insect origin, the impurity profile of vectors prepared from the two systems are vastly different. It is hard to say whether insect proteins will be more immunogenic in in vivo applications, close monitoring of host cell protein levels is recommended.

Both systems are used for making AAV for clinical trials. 293 cells as producing line can raise issues of potential contamination of human virus. The Sf9 system, on the other hand, uses helper virus in the production.

When we at Applied Viromics offer both systems to make your AAV, we listen carefully to your needs and concerns. We want to help you make the choice to take advantage of the best of those technologies have to offer.

The advantage of using 293 cells to generating AAV is fast (less than two weeks).This method also avoids using helper virus, eliminating any chance of helper virus contamination.The production scale is also flexible to meet your needs.Production lots as small as 2E11GC (for AAV2) to as large as 1E14 can be arranged.

At Applied Viromics, we have prepared various versions of shuttle plasmids to meet your special needs. We have constructs with different promoters, including inducible ones, with N-terminal tag sequence to allow fusion protein expression, and with marker gene cassette for selection. All above shuttle plasmids are extensively tested and work great.

Three Major steps to generate the AAV in 293 Cells 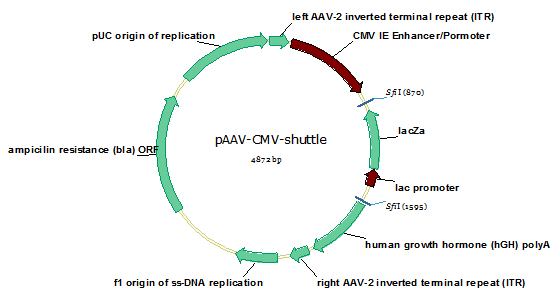 After subcloning your GOI into shuttle plasmid, we amplify the plasmid ready for transfection.

We use double CsCl gradient centrifugation to purify all AAV serotypes. Then the de-salting step is applied to exchange the AAV into the storage buffer.

In terms of small scale AAV2 purification, heparin affinity column method was used for the purification.

Insect cell system will allow efficient generation of AAV vectors at scale. Vectors lots of up to 1E16 GC can be generated with titer as high as 1E14 GC/mL.

1) Sub-clone your gene of interest (GOI) into pFastBac shuttle plasmid.

Baculovirus containing your GOI is made from transfecting Sf9 cells with baculovirus DNA. The baculoviral DNA has the GOI insertion made by homologous recombination.

AAV is made in Sf9 cells after infection with baculovirus containing AAV genome as well as other baculovirus providing the helper function. Then Sf9 cells is lysed and AAV vector purified using double CsCl ultracentrifugation method.

Viral capsid can only pack its genome up to certain size. For recombinant viral vectors, some viral sequences are removed to accommodate the expression cassette for the gene of interest. Thus the size of the gene, together with its promoter and poly-A sequence, cannot exceed certain limit.

The maximum size of the gene of interest to be cloned into the Applied Viromics pAd-shuttle vector is 5.3kb.

Adeno Virus will lose half of its activity when stored at4°C for 7 days. We recommend aliquoting the virus into small volumes (preferably single-use aliquots) upon receipt and storing at -80°C.

According to the guidelines from the National Institutes of Health (NIH), Adeno vectors are considered as risk group 1 agents that are not known to be associated with disease in healthy adult humans. Adeno vectors can be handled in a biosafety level 1 (BSL-1) environment.